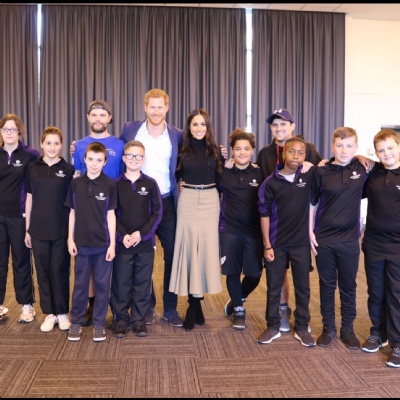 Prince Harry and Ms. Markle visited Nottingham Academy Ransom Road Campus on Friday 1st December. The couple were in Nottingham for two separate engagements on subjects that Prince Harry is passionate about raising awareness of – HIV/AIDS and youth crime.

Prince Harry has visited Nottingham, mainly St Anns, many times and this is his third visit to the Academy. His Royal Highness wanted to introduce Ms. Markle to a community that has become very special to him and to some of the projects that the Royal Foundation supports, following the announcement of their engagement this week.

Their first visit of the day was to Nottingham Contemporary where they visited the Terrence Higgins Trust World AIDS Day charity fair. They stopped to wave and talk to thousands of people outside the National Justice Museum before travelling to Nottingham Academy.

On arrival His Royal Highness and Ms. Markle were met by Principal Mr Kulaya and Deputy Principals Mrs Quinton and Mrs Foulger. The visit was planned for 90 minutes and this time was packed with lots of events timed to perfection.

First they met with local primary schools head teachers as well Full Effect staff and mentors. Full Effect is a programme that has been supported by The Royal Foundation since 2013. The programme supports children and young people in St Ann's and helps to prevent young people becoming involved in youth crime through a combination of early intervention, mentorship, and training. The focus of much of this work is during the transition phase into secondary school.

His Royal Highness and Ms. Markle then met some of the children benefitting from the programme's Friday Night Youth Club which began in September, who were taking part in a kick boxing session. Prince Harry and Ms. Markle also caught up with Full Effect mentor Chantelle Stefanovic, who recently spoke about the issues facing children and young people in St. Ann’s at the Obama Summit in October. Chantelle’s nurture group were ready and waiting to meet the couple and they had lots of questions for Ms. Markle, asking “what inspires you” and “what advice would you give to someone wanting to be an actress”. Ms Markle gave the girls some wonderful advice and asked them all what they wanted to do in the future.

The couple watched a section from Full Effects Hip Hopera in the school hall before proceeding outside to meet year 11 who were lined up ready to wish the couple congratulations. The whole school were outside to watch as the couple waved and smiled. They were presented with a bouquet by Head Girl Nafi and Head Boy Hamza who wished the couple well and asked for an invitation to the wedding! Prince Harry said “That will be based on good behaviour!”

The day was exciting not just for Nottingham but for the world’s media, a huge press pack attended on the day to capture events and share it across the globe! Our Academy spokes people for the day were Nafi, Hamza and year 8 pupil Leonora. They featured on ITV, BBC and Channel 4 news and were wonderful ambassadors for our Academy.

Mr Kulaya said “Nottingham Academy has been delighted to once again to welcome His Royal Highness Prince Harry to the Ransom Road Campus and we are thrilled that the Prince was joined by Ms Meghan Markle. Academy pupils were excited and felt extremely privileged that they have had the opportunity to showcase the work which the Prince's charity has supported and to be part of such a momentous event.”

Nottingham Academy would like to thank His Royal Highness Prince Harry and Ms. Meghan Markle and to Kensington Palace for including our Academy in this most prestigious day.