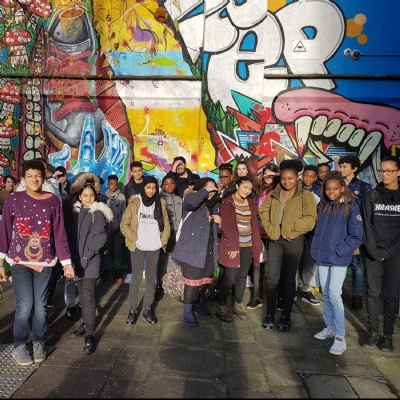 What did we do?

On our trip we had the opportunity to watch a French film at Broadway cinema, have lunch in town, go ice-skating at the Ice Arena and wear non-school uniform.

Firstly we took the bus into town and after 10 minutes  we arrived and walked to Broadway Cinema through the Christmas Market with false snow falling. It was very Christmassy! When we got to the cinema, we were lead to our own private screen and started watching the movie Hyper Noël in French with English subtitles so we could understand it all. There was a mini shop in the cinema where we could buy movie snacks such as popcorn {of course}, chocolates, sweets and water too. Some students ate their way through the film.

The movie was based on Christmas; it was about how Santa found love because he was told my Mother Nature that if he didn’t find a Mrs Klaus he would lose his job as Santa and the North Pole would disappear.

Later on after the movie we got back into our assigned groups and walked to a place where we would meet after our lunch.

We were lucky to be able to go off around town alone with our friends in the Christmas Market area and get some food, some of us even managed to buy some Christmas presents.

We met up with our whole group when lunch time was up and we walked to the Ice Arena, it was a lot of fun even though there were a lot of falls. Some students were great on the ice but others had never been so we all helped each other and laughed a lot.

Sadly it was the end of our trip and we got back on our bus getting back to school a few minutes after school.