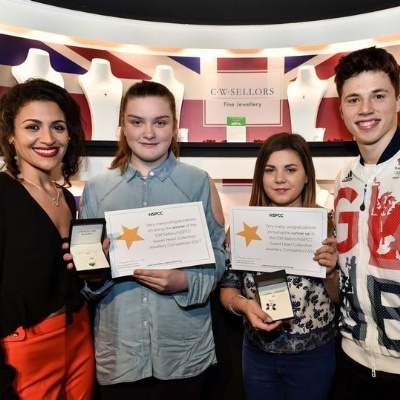 Karlie was selected to work with the NSPCC as an ambassador within the Academy, following this she entered a competition to design a bespoke jewellery piece to be auctioned. The auction took place at a high profile event at Chatsworth House.

The competition was a development on the fundraising NSPCC Sweet Heart Collection, which was launched at the event last year. Ten per cent of every purchase sale goes to support the vital work of the NSPCC, preventing child abuse and neglect.

Special guests at the event included actress Sonia Ibrahim and Olympic diver Freddie Woodward. Sonia was delighted to support the work of the NSPCC, given that her recent role in the soap, Coronation Street which involved the sexual exploitation of young people. The NSPCC acted as consultants to the script writers.

Freddie Woodward commented on his support of the NSPCC. He said: “Any contribution I can make to encourage young people to develop their potential and strive for excellence, is what I aim to do. Sport is a great way to do that not just for elite athletes but for everyone."

The Young Jewellery Design Competition started back in August when a group of NSPCC young campaigners, including Ransom Road pupil Karlie, from the charity’s participation group in East Midland’s region, were given a tour of leading British Jewellery manufacturer, C W Sellors’ design, metal working and stone cutting workshops at Ashbourne, Derbyshire, to get a better understanding of the processes involved making jewellery.

The winning design has been produced as a limited-edition piece of just ten, Karlie got to keep one of the pieces and said she will “keep it for best”, the design is based on the puzzle symbol used by autistic charities as this is a cause also close to Karlie’s heart.  The remaining pieces were auctioned to raise money for the NSPCC.