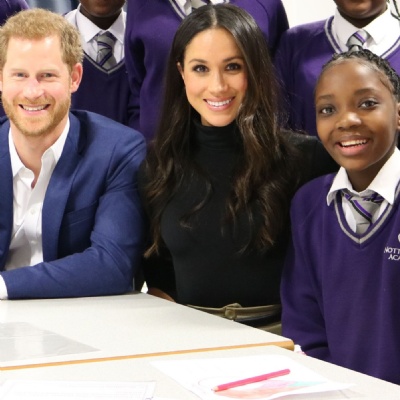 Year 8 pupil Leonora left “speechless” as she receives invitation to the wedding of His Royal Highness, Prince Harry and Ms. Meghan Markle

Leonora Ncomanzi, a pupil from Nottingham Academy Ransom Road Campus, has been invited to attend the wedding of Prince Harry and Ms. Meghan Markle at Windsor Castle on 19 May.

The invitation follows a number of meetings 13-year-old Leonora has had with the royal couple. Leonora is a member of a nurture group run by the Full Effect programme which is supported by the Prince's charity the Royal Foundation. Harry and Ms Markle, and has met them several times at Nottingham Academy.

That included the couple’s first public engagement, which took place in Nottingham in December. Leonora and the royal couple discussed her involvement with Full Effect, a mentoring scheme established by Prince Harry aimed at improving the lives of young people. Leonora is part of the sessions delivered by her mentor, Chantelle Stefanovich.

During that visit, Ms Markle spoke to Leonora and promised her a private visit to the academy, which she honoured earlier this year. Leonora said “When I found out that I was invited to the wedding, I was speechless. I am so excited! When my Mum was told I was invited she screamed for five minutes! Meghan is such an inspiration to me – the first time I met her I asked her if she had any advice for me as I want to be an actress like her. “She said I should always be prepared to face rejection but to keep following my dreams. I can't wait to see what she is wearing on the day! I have already bought my dress too!”

.
Helen Foulger, Deputy Principal of Nottingham Academy’s Ransom Road Campus, will also be attending the wedding alongside Leonora. She said: “It is an absolute honour to be invited to such a prestigious event. I am naturally very excited that I will share this experience with Leonora. His Royal Highness and Ms Markle has built a very special relationship with the Nottingham community and with our Academy.”