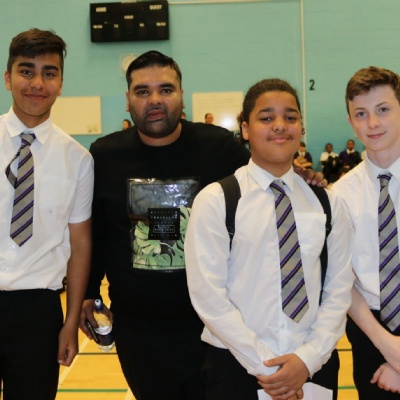 Most well-known for his hits ‘La La La’ featuring Sam Smith and ‘Running’ featuring Beyonce, Shahid Khan known as ‘Naughty Boy’ came to the Ransom Road Campus to deliver an aspirational speech to pupils in Year 7 and Year 8.

The event began with an inspirational talk where Shahid told of his background, growing up on a council estate in London where being a musician was frowned upon. He pursued his dream and now his hard work and determination has paid off. A hugely successful sought after producer, Naughty Boy is determined to encourage young people to work hard, to aspire to success and not to fame.

Year 7 and Year 8 pupils then asked Naughty Boy a range of questions including:

“Who would you like to work with next?” (Adele)

"Does your Mum like your music” (yes - 'Running' is her favourite)

"Who is the most hard working artist you have worked with?" (Beyonce)

And a very popular question lots of pupils wanted to know - “Do you play Fortnite?” Yes he does!

Pupils were then able to get those all-important selfies before Shahid and his entourage made their way to CRS studios in St Anns.

Shahid said “I’ve loved this afternoon, it's been great fun; I’d love to come back and get on the piano”.  Nottingham Academy would love to welcome Naughty Boy to the Academy again too. We thank Naughty Boy and the Royal Foundation for arranging the visit, one which will be a highlight of school memories for many of our pupils.