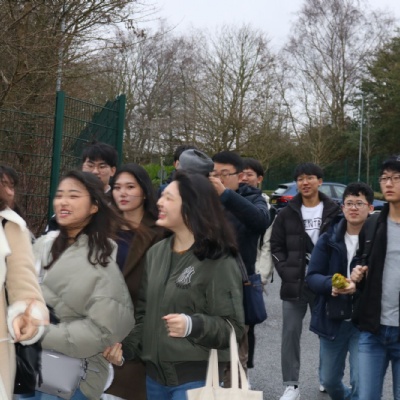 Our visitors spent three days at Ransom Road campus where they teamed up with our Pupil Parliament to take part in a programme of activities including drama, sport, music and cooking.

The visit began on Friday 8th February 2019 when our Pupil Parliament introduced themselves and Nottingham Academy.

They spoke highly of the academy and celebrated the diversity of it, by talking about the variety of nationalities of our pupils.

Visitors then took part in a quiz about how well they know Britain's history, as well as their knowledge on Nottingham. They scored very highly in all the quizzes.

Activities based around the British culture and Nottingham's Robin Hood were then held.

Ms Wilkins, who is a SEN Learning Mentor at Nottingham Academy, handed out traditional British sweets to her group, who watched the Mr Bean film & listened to English music, such as Stormzy. To finish the day, some of our pupils performed dance and drama routines.

On Monday 11th February, our visitors and Pupil Parliament took part in team building and sport activities where they had to communicate to each other non-verbally.

They also hosted a tea party where they served scones they had made during a cookery session and. They served this with jam, cream and tea.

In the afternoon our visitors gave a presentation on the history of South Korea and helped our pupils make name tags in Korean letters.

On the final day our visitors took part in an art activity and a music workshop where they played a range of instruments. Nottingham Academy is extremely proud of our links with South Korean education providers.

It started about six years ago when Senior Deputy Principal Mr Hashim went to South Korea to take part in a Maths teacher exchange. It followed with another five English teachers also taking part in an exchange where they observed and shared ideas with schools in South Korea.

Over the years our sixth forms students have also visited the country for a two-week exchange. “It brings the best out of our pupils and they are very proud to represent the academy.”

Check out our gallery to see more pictures.